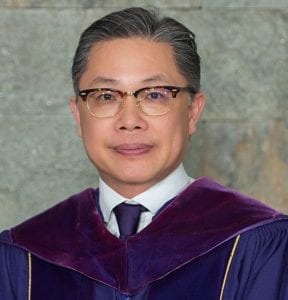 Kai Meng Mok received B.Sc., M.Sc. and Ph.D. degrees in Civil Engineering from the University of Washington. He began his academic career at the University of Washington and joined the University of Macau (UM) in 1993 as an assistant professor. He is now a Full Professor of Civil and Environmental Engineering at the Faculty of Science and Technology (FST). He has been serving as Master of the Henry Fok Pearl Jubilee College at UM since 2017. During his career at UM he also served as Associate Dean (1997-2007) and Dean (2007-2009) of the FST. Mok is an award winning scholar in fluid mechanics and environmental engineering and science. He is recipient of the 27th Lorenz G. Straub Award, the European ERASMUS MUNDUS mobility scholarship, the second prize of the 2001 UM Research Award, the 2001 K. C. Wong Education Foundation Fellowship, the 2011 UM Academic Staff Award, and the second prize of Technology Invention of the 2014 Macao Science & Technology Award of the Macao SAR Government. Mok makes contribution to international, national, and local professional and scientific communities as well as society. He served as a member of the Science and Technology Council of the Macao SAR from 2008 to 2016. He is listed respectively in the National Science and Technology Project Expert Database (since 2009) and the National Science and Technology Awards Evaluation Experts Database (since 2012) under the Ministry of Science and Technology of the People’s Republic of China. He is member of the Higher Education Council of the Macao SAR, president of the Association for the Promotion of Higher Education in Macao, vice president (Macao) of the International Chinese Association for Computational Mechanics, chief supervisor of the International Forum for Clean Energy (Macao), vice president of the Macao Society of Oceanography and Hydraulics, director general of the Yat On Responsible Gambling Counselling Centre, and vice president of the Macau Social Services Centre.

As founding dean of the Honours College (HC), Mok led efforts to create a three-year honours programme to nurturing leadership of students, shaping them to become globally competitive leaders and intellectual achievers committed to collaborative and creative thinking for Macao and beyond. He established cooperation agreements with seven universities in the US including University of Michigan – Ann Arbor, University of Illinois – Urbana-Champaign, University of Rochester, Boston College, George Washington University, Washington University in St. Louis, and University of Notre Dame, as well as University of Coimbra in Portugal for hosting HC students one semester to let them gain comparative perspective on their studied disciplines while developing their senses of international understanding and increasing their cultural fluency. To complement the unique honours programme, Mok established various supporting programmes and activities including group identity and team building retreats, honours forum, language proficiency enhancement programme, research experiences for students of HC programme, and honours project symposium. Mok guided HC students to establish the Honours College Student Association (HCSA) in 2009 as a platform for students gaining experiences in service learning and developing their leadership potential. It led to the inception of many HCSA signature activities including the news discussion forum, the HC tutor programme, the annual HC promotion month, the charity talent show, and various community services. Knowing an HC alumni network is important for keeping the close tie between graduates and the college, Mok strategically guided the first batch of graduates to form the Honours College Alumni Association (HCAA) in 2012. Mok believes that young people are the hopes and pillars of the country’s future. They must know and care about the country. Promoting the spirit of patriotism among students is important. Since 2012, Mok linked HC up with the Hong Kong and Macao Affairs Office of the State Council and the Liaison Office of the Central People’s Government in the Macao S.A.R. to organize annual visit to different parts of mainland China to let students learn the country’s latest political, economic, and cultural developments.